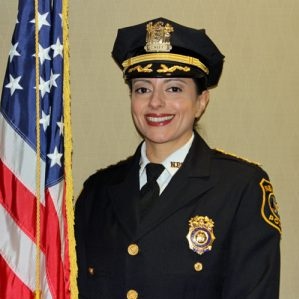 Ivonne Roman has 25 years of experience in policing, serving every rank from police officer to police chief, in the Newark Police Department. Her work experience includes police patrol operations, investigations, internal affairs, precinct commander, and chief of detectives for the major crimes division.  She is a New Jersey Certified Public Manager and is certified in Labor Relations through Rutgers University.

Roman earned a Master of Public Administration with Distinction in 2017 and a Master of Science in Public Affairs and Public Policy in 2020 from Rutgers-Camden, where she is currently pursuing a PhD in the Public Affairs/Policy Department. She holds certifications from the Police Executive Research Forum and the Harvard Kennedy School.

She has served on the board of the American Society for Evidence-Based Policing since 2017 and she is an executive fellow at the National Police Foundation.  She was awarded a National Institute of Justice (NIJ) Law Enforcement Advancing Data and Science (LEADS) scholarship in 2016, and a Women in Media scholarship in 2020.

In 2017, she established the Women’s Leadership Academy (WLA) to increase female representation in law enforcement.  She helped organize the National Institute of Justice (NIJ), Women in Policing summit held in December 2018, and serves as a subject matter expert for the Women’s Media Center, with dozens of media contributions.

She was a journalism intern at the Marshall Project in 2018. She was awarded a 2019 TED Talks fellowship for her work with the WLA.  She is a police relationship manager at the Center Policing Equity and has partnered with the NYU Policing Project on an initiative to increase the representation of women in policing by 30% by 2030.  She was named the 2020 American Society of Criminology Outstanding Practitioner Award winner, in recognition of a law enforcement practitioner who has played an integral role in advancing the field of law enforcement and public safety in innovative ways.