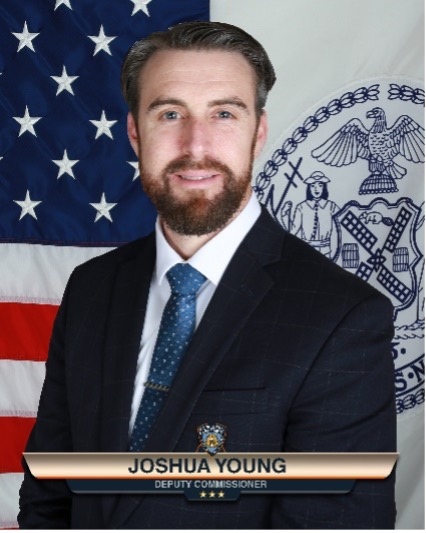 Joshua Young is the Deputy Commissioner of the New York City Department of Correction. DC Young oversees the Office of Management Analysis & Planning where he is responsible for operational procedures, agency-wide policies in-depth analysis, reporting, and the dissemination of statistics related to the agency’s goals and objectives.

DC Young serves as the department’s liaison with the mayor’s office and oversees and directs the preparation of management reports containing detailed quantitative analysis of key statistical indicators monitored by the mayor’s office.

DC Young was previously the Deputy Senior Vice-President at the Center for Policing Equity, where he engaged with governments, non-profits, and think tanks, throughout the United States focusing on redesigning and reimagining public safety models to reduce racial disparities.

DC Young also served as a police supervisor, SWAT Operator, and Undercover Detective in Southern California. DC Young was the first known line-level police officer to successfully integrate a major randomized controlled trial (RCT) within a policing organization. This mega-study was one of the largest multi-site RCTs in the history of criminal justice research.

DC Young has five peer-reviewed publications. His article titled “Contagious Accountability” was voted the Number 1 publication by Sage Criminology for 2016. His article titled, “Report: increases in police use of force in the presence of body-worn cameras…” is the “Top Downloaded and Mentioned Article” in the history of the Journal of Experimental Criminology.

DC Young graduated with a master’s degree in Applied Criminology and Police Management from The University of Cambridge (U.K.). He is also an Executive Fellow at the National Policing Institute, formerly known as the National Police Foundation, and a LEADS scholar with the National Institute of Justice.